Our beloved president Steve Casey was awarded Brisbane North’s Volunteer of the Month for December 2016.

From Matt Walter at Queensland Cricket:

We had the pleasure of catching up with Steve at the Ian Healy Cup which Albany Creek/BNJCA hosts every year.

Steve has been the President at the club for 16 years and his contributions don’t stop there, with roles on the Brisbane North Junior Cricket Association Inc. committee, coaching rep sides, and growing grassroots cricket.

Thanks for everything you do Steve, Queensland Cricket appreciates all of your efforts now and into the future.” 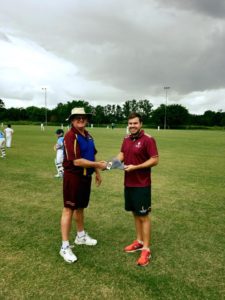 We at The Hawks whole-heartedly agree!!